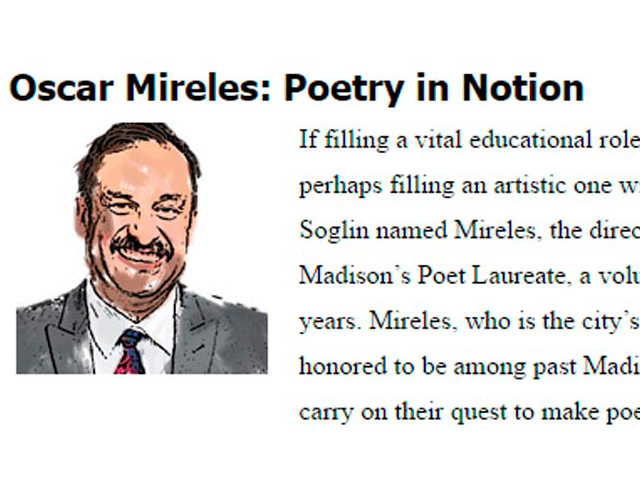 Oscar Mireles one of Greater Madison’s Most Influential People

The year’s 15 most influential people in Greater Madison

Several members of our 2016 Most Influential class prove that you don’t have to be a big shot to make a difference in fields such as academia, activism, or the arts. Unlike the 2015 class, which was highlighted by people who led the community through a crisis that followed the tragic death of Tony Robinson, this year’s class has largely operated without a spotlight.

If filling a vital educational role wasn’t enough for Oscar Mireles, perhaps filling an artistic one will be. Earlier this year, Mayor Paul Soglin named Mireles, the director of Madison’s Omega School, as Madison’s Poet Laureate, a volunteer position he will hold for two years. Mireles, who is the city’s first Latino poet laureate, is truly honored to be among past Madison poet laureates and fully intends to carry on their quest to make poetry a daily part of life for Madisonians.

A past winner of the Martin Luther King Humanitarian Award, Mireles already contributes to the arts through poetry that expresses the Latino experience. As poet laureate, he will be expected to compose poems for special events and to be an ambassador for poetry. Having written poetry for 30 years, he’s looking forward to assignments such as coordinating quarterly readings by guest poets at City Council meetings and the Metro Bus Lines poetry project, serving as the city’s poet ambassador in the schools, and reading poetry throughout the community.

As executive director and principal of Omega School, his life’s work has been pure poetry for students of all ages looking to complete their high school education and recompose their … continue reading >>