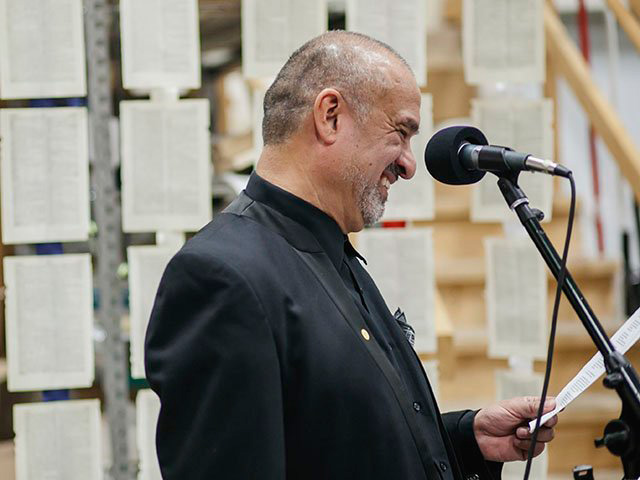 Poet of the people

by Michael Popke | Isthmus | Jan 28, 2016
Educator and author Oscar Mireles assumes the mantle of poet laureate
If you see poems etched into the sidewalks along Williamson Street or displayed on Madison Metro Transit buses, or hear them recited at Common Council meetings, you’re witnessing traditions established by Madison’s poets laureate.

Madison’s newest poet laureate, Oscar Mireles, executive director of the Omega School for adults seeking to complete their GED/HSED, is looking forward to establishing his own traditions. He’s the first Latino to hold the position, and the first male since inaugural poet laureate John Tuschen left the post in 2000.

“I want to build upon what other poets laureate have done,” says Mireles, 60, the editor of three volumes featuring works by Wisconsin-based Latino writers published under the series name I Didn’t Know There Were Latinos in Wisconsin.

His calendar is filling up quickly. Although Mireles didn’t officially begin his two-year tenure until Martin Luther King Jr. Day, he estimates he’s received about 50 calls from organizers of various groups in Madison — including the Madison Reading Project and Arts Wisconsin’s Arts Day — since Mayor Paul Soglin announced in early December that Mireles would replace outgoing co-poets laureate Sarah Busse and Wendy Vardaman.

“I knew I was going to be little more high profile,” Mireles laughs. “But it was also a little more than I expected.”

On Sunday, Jan. 31, Mireles will be the guest of honor at a reception and poetry reading at Centro Hispano, 810 W. Badger Rd., from 2 to 4 p.m. Former poets laureate also will read, as will other notable poets from the city. The event is free and open to the public.

It will be the first official effort by Mireles to achieve one of his goals as poet laureate: uniting local writers of poetry, fiction, nonfiction and music in mutual support and collaboration.

“There’s a lot of writing going on in Madison, and people are doing good things,” he says. “I want to bring them together to look at what we have in common and how we can support each other’s activities.”

“[The poet laureate position] is a testament to our cultural values, civil discourse and exchange of ideas,” says Karin Wolf, arts program administrator for the Madison Arts Commission, which oversees the position. “Madison was one of the first cities in the country to have a poet laureate, and that’s something I can brag about.”

The generic definition of “poet laureate” — a local poet officially appointed by a government organization or official to write poems for special events — doesn’t seem broad enough to cover the role poet laureate has played in Madison.

Since 1977, five people have held the position and taken lead roles in creating verse for everything from Wisconsin’s Sesquicentennial in 1998 to the 2011 protests against Act 10 at the State Capitol.

During his first term as mayor, in 1977, Soglin appointed Tuschen as the city’s first poet laureate. Tuschen served for … continue reading >>