Poetry in motion along Monroe Street 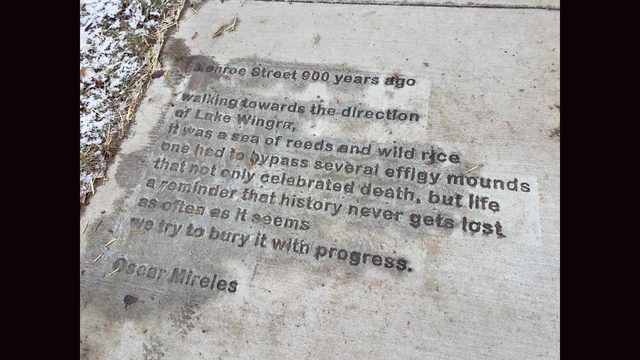 Poetry in motion along Monroe Street

Madison’s first poet laureate, John Tuschen, was a bit of a contrarian, so in his spirit, allow me a suggestion. Now that Monroe Street has finally — finally! — reopened to two-way car traffic, try walking it.

The sidewalks will speak to you.

In fact, you will find Tuschen there, even though my old friend died in 2005. He really died. I feel compelled to say “really” because Tuschen once walked into a used bookstore in Madison and was stunned to see one of his books of poetry for sale for $250.

The reply from behind the counter: “The author was a local poet who died.”

All six are represented in a Madison Arts Commission project that has embedded 12 poems, two from each poet, in the sidewalks along Monroe Street. Channel 3 reported on the project in September. An official dedication of the embedded poems is tentatively planned for April.

I laughed when Madison arts program administrator Karin Wolf told me last week it wasn’t necessarily easy to find two poems of Tuschen’s that would make suitable reading for “little kids walking to class” along Monroe Street, but the ones chosen, “Poem for Jordan” and an excerpt from…continue reading>>